The very land and magic are both playing a role on Drakerys. And what happens when the force of nature meets magic? Yes, you guessed it: ELEMENTALS! 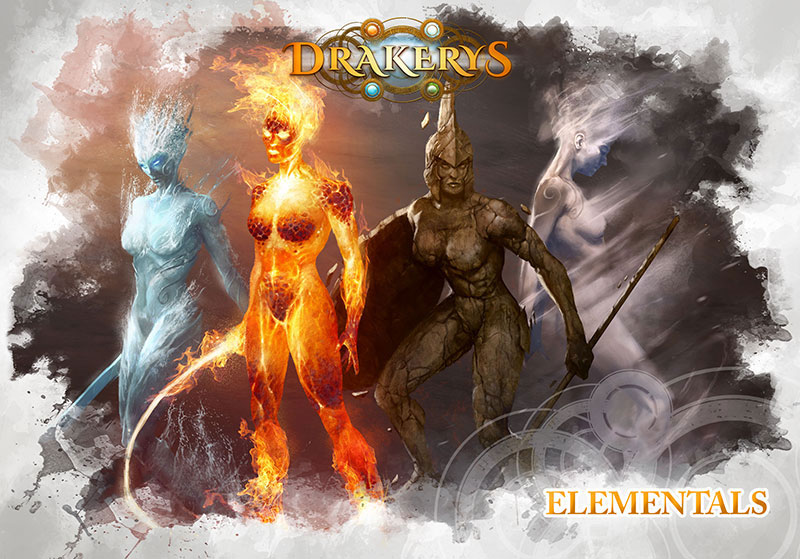 Their presence on the battlefield has an effect over the game. As beacons of primal magic, they naturally influence spells cast by a nearby magician. Throwing a fireball is just easier and deadlier when you have the support of a fire elemental ally. Imagine what a magician can do if he befriends several of them! On the other hand, they can also have an influence over troops nearby. Being in the magical aura of an Earth elemental grants some form of resistance. These game effects of elemental support give elemental miniatures a key role in deployment and tactics all over the game. Elemental beings are not the sole manifestation of Drakerys’ reawakening energies. The game features elemental springs, places of power where magical energies flow in a wild way. These prized springs are called…maelstroms.

In Drakerys, magicians have a special link to magic and produce the mana, which is the energy they need to independently fuel their spells. Being around a maelstrom, however, allows any magician to draw in the magical flow to multiply their mana resources. The more mana a magician has, the more often he can cast his spells. Any spring can get depleted if drawn too much, of course, but magic is eternal. A depleted maelstrom eventually comes back to life like Drakerys’ magic itself. So, because of these great advantages, Drakerys’ champions seek elemental powers to boost themselves and their troops on the way to victory. Magicians, once considered useless on the battlefield, are again courted as they achieve godlike powers when surrounded with elementals beings and maelstroms.

Drakerys’ history tells of the tales of how the elemental kingdoms clashed against each other during the world’s genesis, birthing some of the fearsome monsters reawakening now. Elementals are sentient beings and some of them have been around for eons. Will they helps us or will they rises against us? What are their plans?