Anja Wrede has been a game designer for children for about twenty years.

Before becoming independent, she worked for Haba. Since then, she has often worked with German autors, such as Christoph Cantzler, with whom she designed a lot of games.

Not only Anja creates games, but she can also draw really well, which enables her to illustrate most  of her games : they often show animals each more lovely than the next!

In January 2017, she created Fearz! With Bruno Faidutti. It is a coproduction of the Editions Volumique and Don’t Panic Games. 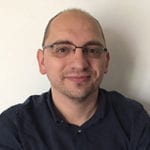