Your identity must remain secret! “… for ghouls, eating regular food is totally impossible. Their organisms cannot assimilate anything but human flesh, with the exception of coffee. That is why a large number of them congregate in coffee shops, and act like humans to better blend into the population and commit their misdeeds.”

In this bluff-and-deduction board game, play as one of 15 different characters from the anime, including Kaneki, Touka, Juzo or Rize. Whether you are a mere human, a ghoul, or an investigator : roam the streets of Tokyo, keep your identity a secret, investigate, and cover your tracks!

It is up to you to uncover the other player’s real nature and come out on top. In the hostile environment, always keep in mind that everyone you run into might be a killer!

It is also important to note that the eyes undergo extreme color changes during transformation: the sclera shifts from white to the darkest black and the iris turns red.

In Tokyo Ghoul, you will play as a Human, a Ghoul or an Inspector from the CCG. Your identity absolutely must remain a secret until the end of the game! You have one or more Objectives to complete to be declared the winner. For example, you must survive if you are a Human, or devouring a Human if you are a Ghoul, or killing a Ghoul if you are an Inspector.

Move from one place to another in Tokyo, thanks to the Locations tiles of the game: you may be able to interrogate any other player and may exchange one card with them if you want. Pay attention to the Actions with a red background: they are mandatory for all players and they might draw suspicion on several players… 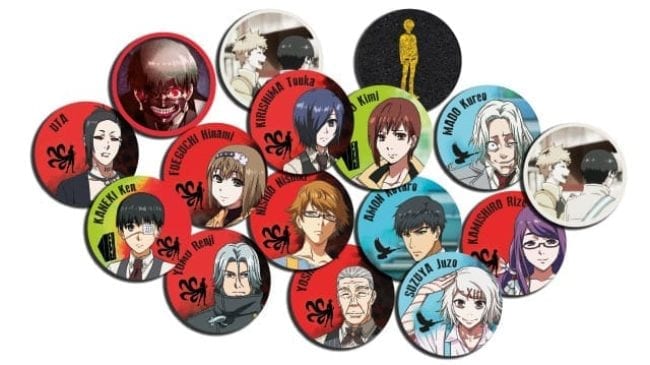 Share
Tweet
About Don’t Panic Games
Founded in 2013, Don’t Panic Games is a young game publishing company from France. We aim at developing all the aspects of the imaginary culture as a whole : we want to develop imagination across media... Read more
Follow Us on
Subscribe to our newsletter
Don't Panic Games All rights reserved © 2017-2019 - About - Conditions - Legal notice - Contact - Site credits Julien Monvoisin
0